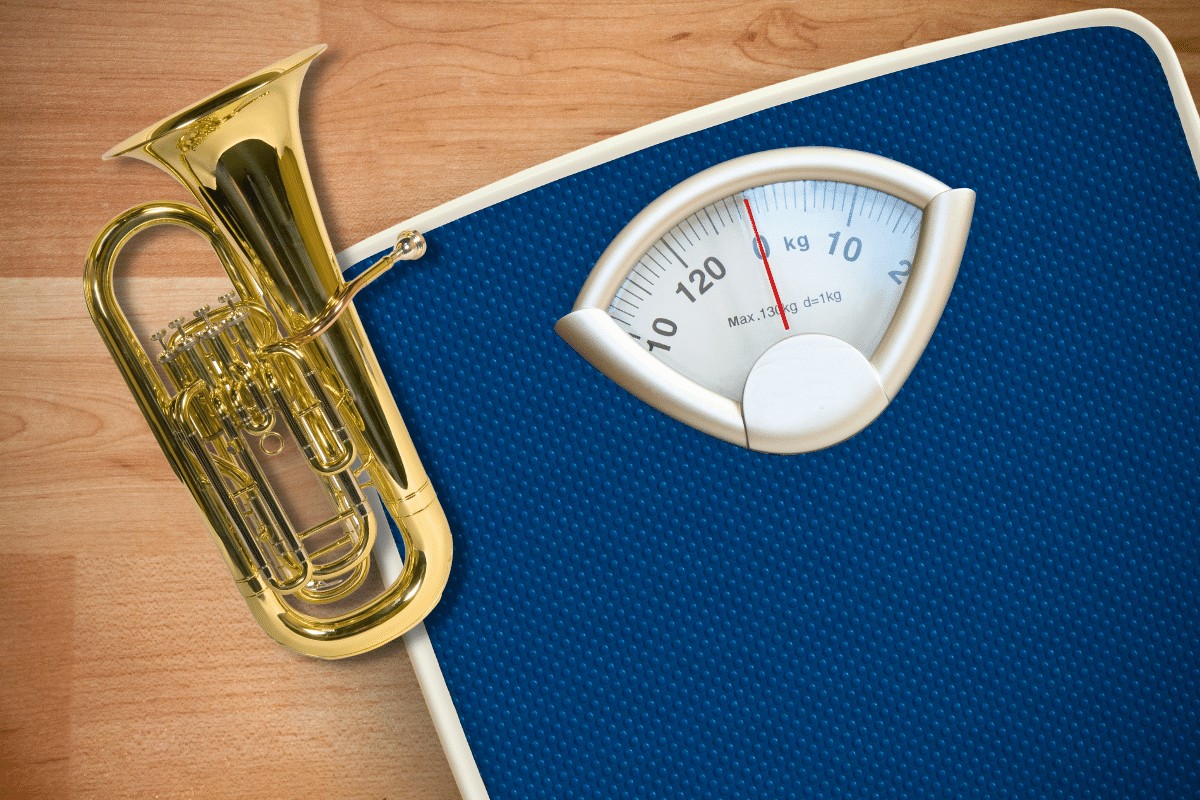 As a tuba player for over 20 years, I often hear the exact same question when people find out I play the tuba.

Woah! That must be heavy! How much does a tuba weigh?

The answer isn’t so simple, but there are some general rules.

The average tuba weighs between 20-30 pounds, but there are so many variations it’s not uncommon to find horns outside this range. Fiberglass marching sousaphones may weigh as little as 15 pounds, whereas brass ones and larger contrabass tubas can weigh up to 50+ pounds.

The devil’s in the details, as they say, so let’s get into more direct comparisons, shall we?

Each specific brand and model of tuba has its own specific weight.

A BBb tuba made by Yamaha and one made by Miraphone can weigh slightly different amounts, even though they’re the same size and key.

The following chart will cover the common keys, sizes, types, and how much a given example weighs on average.

It’s also important to note all of this information is given without the weight of the case.

*For more information on what the key, size, and type really mean, check out our detailed article on all types of tubas (with pictures and examples).

**Check out our detailed review of the plastic tuba and if it’s any good.

How Much Does A Sousaphone Weigh?

Sousaphones are a special type of tuba designed (or at least ordered to design) by John Phillip Sousa, the American March King.

In marching bands, people need to carry their instruments while they march.

Tubas aren’t designed for this use.

All their weight is forward, and they’re difficult to balance and play while moving.

So, Sousa had the horn unwrapped and rewrapped so the weight of the brass instrument could sit on their shoulder.

Then, this new instrument became known as the Sousaphone (get it?).

Unfortunately, while this design did much to help the players bear the weight and play better, it did nothing to affect the weight.

And tubas of back then (we’re talking turn of the 1900s) weighed a lot. The metal was heavier, and the design was clunky.

It wasn’t unusual for the Sousaphones to weigh 50+ pounds, even more than the average tuba.

As marching bands became more popular and went into schools, it became harder for young people to carry.

Not to mention, these were expensive instruments to be played outdoors, where they could be damaged easily.

So many schools switched to a new material, fiberglass.

At the expense of potential sound (fiberglass doesn’t sound as large as brass), the musicians gained a lower weight and price.

Colleges still use heavier brass sousaphones (35-40 pounds) for their bigger sound. High schools mostly use fiberglass (15-20 pounds), but some serious ones use brass.

How Much Does A Tuba Case Weigh?

Not only are the different weights for different sizes and types of instruments, but there are also different types of cases.

In this section, let’s look at the three main types as they would fit the standard BBb 4/4 tuba.

Regular cases have hard exteriors but are still light enough to carry easily.

They protect the horn from most damage, but not all damage.

They will add around 20 pounds of weight to the heavy instrument.

Soft cases or gig bags don’t provide as much protection and shouldn’t be used with young players or when traveling on a plane or somewhere you check your baggage.

These are mostly for the professional tuba player.

But they are much lighter and easier to carry.

They often fit on your back like a giant backpack.

Depending on the type, expect 10-15 pounds of weight for this one.

These things are bigger and specifically designed to take a beating.

Combined with the weight of tubas, they can get up there.

Most of the time, they have wheels.

They’re called flight cases because they’re designed to go on planes where they may be tossed around quite a bit.

The weight starts around 30 pounds but can reach up to 40 or 50 pounds depending on the size of the tuba and how big the case is.