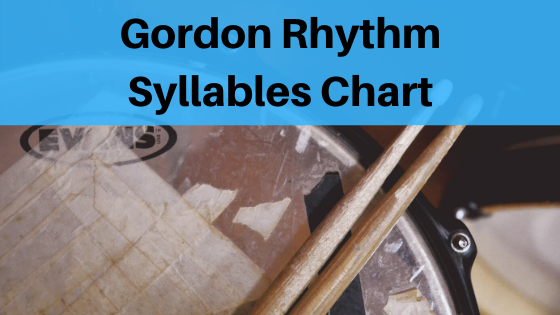 Do you want a simple resource for using the rhythm syllables used by some major music methods?

The Gordon rhythm method was developed by James Froseth and is popular with Music Learning Theory and Conversational Solfege.

One useful tool to use would be a Gordon rhythm syllables chart.

Gordon rhythm syllables align with beat no matter what meter you’re in. For example, any note which lands on the beat is said with “du” while any note landing exactly halfway between the beat is called “de.” This adapts to any meter easily.

Read on for more details on the system and how it compares to other similar systems.

What Are Rhythm Syllables?

In general, rhythm syllables are sounds developed for students and musicians as a way to help them understand and perform rhythms quicker and deeper than through rote memorization. The syllables come in two main types: replacement syllables or beat-function syllables.

Replacement syllables do what the name says: they replace the note values with a specific sound. For example, a quarter would always be called a “ta” no matter what the meter was.

Beat-function syllables follow the rhythm that gets the beat and changes depending on the meter. The Gordon rhythm syllables are an example of this type of system.

These syllables change based on the placement of the rhythm in relation to the beat rather than the specific rhythm value as used by the Kodaly counting system (also known as ta ti ti rhythm).

The following chart demonstrates how the system works in 4/4 meter.

If the meter was changed to 2/2, the syllables would then change to match this:

When reading about the Gordon rhythm syllables, you’ll often come across the terms macrobeat and microbeat. But what do these mean?

These words are different terms which mean concepts you may already understand or know by different words.

Macrobeat – The large beat pulse. When in relation to meter, this is the note that gets the beat.

Macrobeat can also just be known as the beat by most musicians.

Microbeats of 2 is also called duple or simple, while microbeats of 3 may be called triple or compound.

The microbeat can also be called the division.

A lot of people wrongfully assume that Edwin Gordon developed his Gordon rhythm method all on his own. While the method of instruction may be his own, the sounds used are actually properly called Froseth syllables.

James O. Froseth of the University of Michigan was a pioneer for instruction in beginning instrumentalists. As part of this, he sought to develop a rhythm system using syllables which could help the articulation of young band students.

Edwin Gordon, founder of Music Learning Theory, borrowed from this system for his own teaching focused on elementary students. This is similar to how Kodaly and other experts borrowed from those who came before.

For those familiar with takadimi, you may notice some similarities between that method and the Gordon rhythm syllables.

They’re both beat-function systems using syllables that follow the placement of the rhythm on the beat.

Here are some quick pros and cons for a quick takadimi vs. Gordon comparison.

I hope you found this information and the Gordon rhythm syllables chart helpful. This system is in use by many and can help your student understand rhythms quicker and deeper.

Do you use this system? Let us know why you like it!