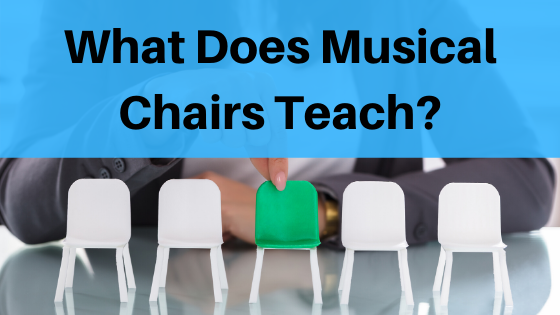 You’ve played it, you’ve probably taught it, and the whole world knows it. But what does musical chairs teach?

Musical chairs as a game doesn’t actually reinforce a lot of musical concepts naturally. If you require it, you can reinforce steady beat and form as well as expose students to different types of music. On a non-music level, you can use musical chairs to teach skills like fair play, sportsmanship, and focus.

Read on for more details about this fun musical game.

The way most people play musical chairs isn’t going to be of much instructional use in your music room, but with some twists, you can reinforce the ideas discussed in this section.

Most of the time your kids play musical chairs, they’ll just be moving around the chairs. This movement is useless without connection to the music.

To reinforce steady beat, you can require kids to march to the beat. Make sure to follow up on this requirement by disqualifying people who just move around the chairs.

Keep in mind that if you’re doing this extra step, you should choose music with a strong steady beat. Most folk songs will do the trick, but you may also want to consider a popular song with steady beat.

Pro-tip: Help them out by playing the beat on a drum. Also, kids who are out can play the beat on rhythm sticks or egg shakers along with the song (which also gives these kids something to do).

Form is an important musical element whether it’s AB form, ABA form, or beyond! There aren’t many better ways to reinforce this concept than through motion.

Ordinary musical chair rules won’t be of much help here. But with an additional rule, you can help students understand the form better.

Try having students reverse directions when you play a triangle. Then, you make sure to play the triangle when the phrase is over or the section changes.

After a time, require them to sense when the music has changed. You’d be surprised what the students can pick up from this.

Another idea would be to have students move different ways matching the section changes. If they need help, you can use different instruments to designate different sections.

For more ideas, check out the movements for Carmina Burana which helps reinforce form.

Asking students just to sit and listen to a new song is something you should almost never do. They need to at least be given something to listen for.

Musical chairs would be a good way to expose students to new songs or classical pieces you want them to be prepared for.

I will use musical chairs as a game to help practice concert songs they are struggling with.

Pro-tip: Ask a question before you start the music (“Name an instrument that’s playing”). Then, offer the person who will be out the chance to save back in if they can answer the question or task.

If you just play musical chairs without any preparation with the students, you probably won’t teach anything. But if you discuss and reinforce non-music skills, musical chairs can be elevated to a more relevant activity.

Since the dawn of time, people (students and adults) have been competitive. This isn’t a problem at all; it drives us to be better and pushes us to develop new knowledge and skills.

The problem comes when people get too competitive. You can usually tell when this line has been crossed by players breaking the rules of fair play or sportsmanship.

Fair play is playing by all the rules with honest effort. To help reinforce this with musical chairs, you should have a discussion beforehand on the idea of fair play, the rules you place for the game, and what constitutes as “cheating.”

During the game, you monitor for this and praise those for following the rules. After the game, encourage cooperative discussion.

Sportsmanship is treating the other players with respect and accepting loss or victory graciously. Students often have poor models of this concept in professional athletes and, sadly, some of their parents.

Before, during, and after, help students learn what sportsmanship is by praising and rewarding the following acts:

Things to watch for and shut down quickly:

Pro-tip: I let my students know up front that games will end almost instantly if they break the three previous rules. There isn’t a reward for winning, so if they do cheat, the only ones they’re cheating is themselves.

(But you should still be watching for cheating.)

You’ll notice a theme at this point. The only way to upgrade musical chairs to intentionally discuss and monitor for the concepts.

Focus is an essential skill to succeed in anything in life. You need the ability to focus on something to do it well.

Music can increase focus which can then increase grades. But you discuss with students what focus looks like.

You’ll be surprised even at a young age how much students know about what focus is and how it can help.

This game isn’t going to revolutionize your music curriculum, but now that you know what musical chairs can teach, you can use it as a reward while still teaching something.

How often do you use musical chairs in your classroom? Pop on down to the comments and let us know.